I used to be an OVH DSL user. The service was very good. The only thing that could have been improved was the Technicolor router, which is clearly sub-par compared to the quality normally associated with OVH services, but as long as you stick to the default configuration, it would run fine.

But that’s DSL, and I needed a much higher upload for streaming. VDSL being unavailable, I opted for optical fiber, and chose the SFR French provider because FTTLA is easier to setup and the numbers looked more than enough. Knowing it wasn’t a particularly good ISP, and knowing the industry in general, I expected bandwidth to be an order of magnitude lower than advertised (so roughly, 5 Mbps instead of 50 Mbps). I subscribed, the setup was quick, it mostly worked for a month, with random disconnections, but I could live with it. But then, after that time, everything went south, with much more time of complete unavailability, much lower bandwidth and much more packet dropping. The bandwidth patterns are especially interesting, with sometimes huge download speeds and close-to-zero upload speeds. 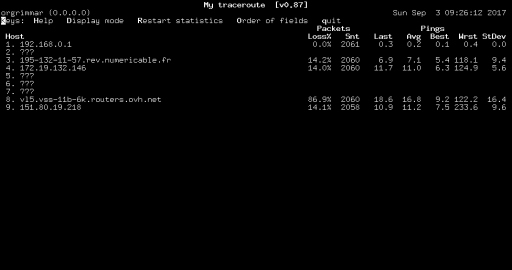 In France, this kind of subscription lasts for a minimum of a year. Luckily, clients are allowed to switch to another ISP, which can then refund part of the previous subscription. This is now exactly what I’m about to do, and I write this quick post to add one more account of how bad this ISP can be.